Thanks for your generous offer. Order details for the vane cover are below, but in the meantime….

Our hydrovane (a.k.a. “Scarlet”) has been a complete star the last 18 months. We’ve covered over 18,000nm, with her steering for most of them. Our autopilot died on us about half way through our adventure, but we found that Scarlet filled in quite nicely even while we were motoring, as long as there was even the lightest of winds. I must admit, that she took a little getting used to (the tips on your website are very useful, but we discovered them 12 months too late!), but now that we have the hang of her, I can’t imagine why any yacht would a) be without one, and b) want to use any another system.

At one point, crossing the Bay of Biscay at the start of our trip, we lost our wheel steering in the middle of the night. Fortunately the main rudder still worked, but it was very reassuring to know that if that went too, we’d still have scarlet to steer us on. At another point, we got knocked down sailing to Colombia, and the force of the wave that hit us twisted the top half of Scarlet through 90 degrees. Sadly that put her out of commission until we made landfall a few days later, but despite our worst fears, all we needed to do was release a couple of bolts, and gently crow-bar her back into place….. she was good as new again, with not even a hint of damage to the vane. I bet the plywood vanes of other manufacturers wouldn’t have stood up as well.

I’m not sure how old Scarlet is, but if the previous owners of Skardu put her on before they started their circumnavigation, I have to guess that she has at least 70,000nm under her rudder, and she’s still going strong!!!

On that note, I’d still very much like to order a new RED vane cover. Ours is currently wearing through and looking a little faded, and we don’t really want to change Scarlet’s name to Rose!

It might be a bit tight to have the package reach us in NZ before we set off again, so if could, could you be so kind as to send it to the following address instead. It may also make shipping cheaper/easier.

Many thanks again,
Best, Mark 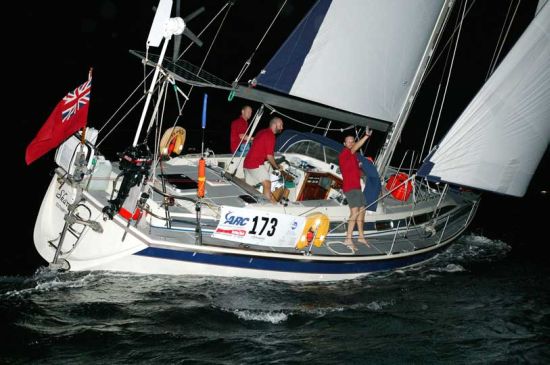